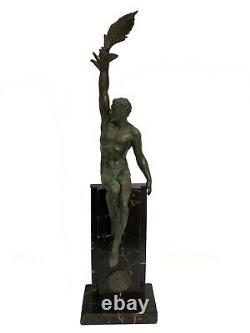 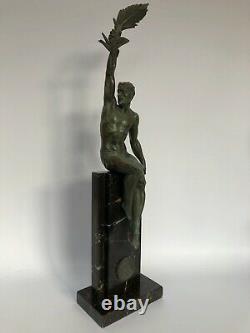 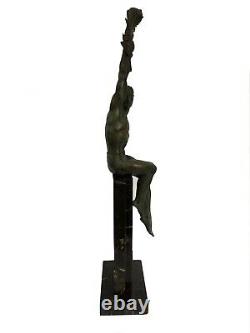 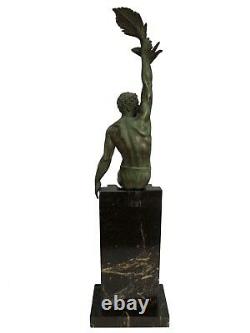 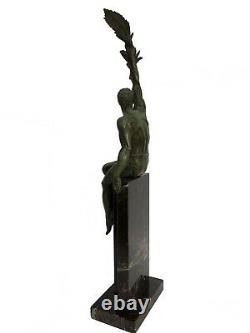 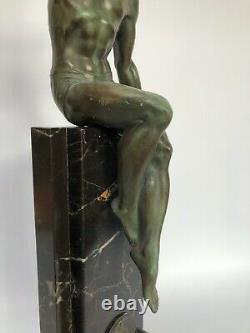 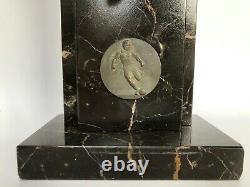 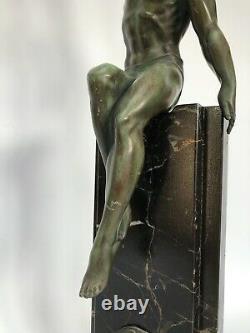 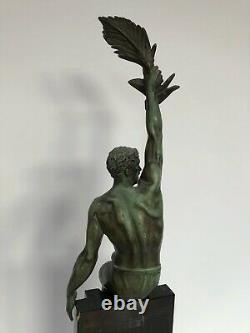 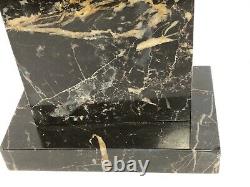 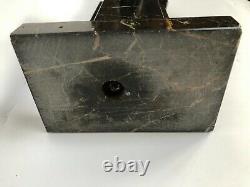 The art cast glory marks the faguays edition max the glassmaker art deco c2682. \"glory\" of the faguays: art cast subject with green patina. It depicts an athlete sitting on a veined black marble, brandishing the palm of victory. Art deco period sculpture, max editions of the glassmaker. A medal by the f-bouillot smelter attached to the bottom of the marble column.

You will notice in photo 8 that it must be missing a plate on the base, we can see the two small targets that held it. This subject is remarkable for its large size and the finesse of the carving. Signed the faguays on the marble base (photo 11).

Unfortunately patina jumps, wear and friction are to be reported on the subject and clearly visible in the photos. The marble has been revered and has chippeds. For the state thank you for detailing the photos. A student of vibert at the School of Fine Arts in Geneva, he worked with various publishers including max the glassmaker, his great friend, the foundry susse, etling, the nephews of j. His style is similar to that of demetre chiparus. He participated in his first exhibition at the salon of the Society of French Artists in 1922.

He received an honourable mention in 1926 and another mention of honour, in the sculpture section, in 1927. He is the author of the group, in collaboration with marcel bouraine, stele and evolution. This is an opportunity for him to collaborate with the artists Sibyle May and Edouard cazaux. Very prolific, his work deals with subjects as varied as marble, stone, terracotta, bronze, ivory or lalbâtre.

In particular, he sinspires with statues of \"tanagra\". He works mostly on living models, hence the momentum of his decorative objects, often women on the move. Pierre le faguays is also well known for art cast creations under various pseudonyms such as guerbe and fayral, the surnames of his mother and his wife. He presented two groups of sculptures in the goldscheider pavilion at the exhibition of decorative and industrial arts in 1925.

He also participated as an interior designer with two monumental bas-reliefs for the civil aviation hall during the 1937 World's Fair in Paris. After the Second World War, he was found a painter in the square of the mountain mound. Max the glassmaker returned to Paris after thermistice of November 11, 1918.

He published some terracotta works, then made his first sculpture, his famous pelican in the 1925 style (sculpture with an axe). This piece, signed artus (pseudonym of max the glassmaker), has a great success and is the basis of his dedition house created in 1919. He ensures everything himself, the manufacture (font, chisel, patina) and the sale of his works. In 1928, he made his famous clarte, woman with a ball of light, a bronze master piece, after a living model.

In fact, there were three different models: one for the head, one for the torso, and one for the legs: a black American josephine baker ballets. This 1930s torcher takes up the idea of the lant goddess of light, and at the same time symbolizes the time by her boyish hairstyle and the sobriety of her line. Two copies can be admired in the large lounge of the hotel lutetia in Paris. Max the glassmaker makes chandeliers, lamps and lamps, bookends.

He also publishes works of comrades: stone the faguays, (some of his sculptures are signed, fayral or guerrilla, his pseudonyms) renowned for his elegant dancers, bouraine, also talented but dead very young, meriadec, janle, and many others. After the Second World War, max the glassmaker resumed the manufacture of cast-iron and bronze statuettes, then steered its activity towards the creation of bronze objects. A tireless sculptor, he created a new series of bronze danimaux, published in small format. (birds, rhinoceros, donkey, goat, bear, sea lion and a \"don quixote and sancho panca\" group).

Until his last breath, he sculpted and finished a small panther on his hospital bed for three days before disappearing on June 6, 1973, at the age of 82. It is buried in the cemetery of fontenay breaks, next to its friend the faguays disappeared 10 years before it. John paul the glassmaker (1922-1996) took over the company from his parents.

He studied drawing and sculpture in the fine arts of Toulouse, from 1939 to 1943 (painting prize in 1943) and in fine betting arts from 1945 to 1949. He is an architect-decorator of exhibitions and creates French pavilions for international exhibitions, while continuing painting and sculpture at the same time. He made cartoons, created numerous posters, and after the death of his father created several works: humorous bronzes (\"bear\", \"cat has the ball\", \"cat gueridon\"), ashtrays, bookends (\"tequel\").

John paul the glassmaker was extremely attached to all his father's work and anxious to pursue it. Don't hesitate to zoom in. Photos are an integral part of the description.

Total height: 60.5 cm. I remain at your disposal for any questions.

Don't forget to add me to your list of favorites. As you can see in our evaluations, we take the utmost care in the manufacture of our parcel packaging very conscientious with several layers of protection: bubbles, cardboard ....... Shipping costs include shipping costs and packaging to ensure the security of the item until reception. The item \"art cast iron glory signs the faguays edition max the glassware art deco c2682\" has been on sale since Saturday, December 5, 2020.

It is in the category \"art, antiques-art of the xxe, contemporary-sculptures, statues\". The seller is \"mayawallis\" and is located in nantes. This item can be delivered anywhere in the world.