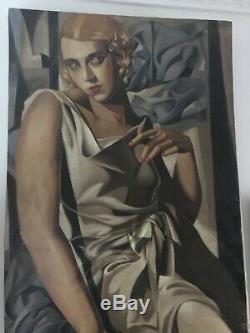 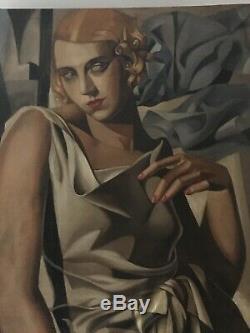 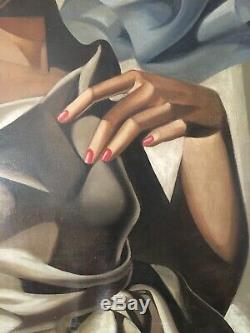 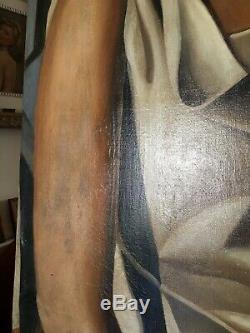 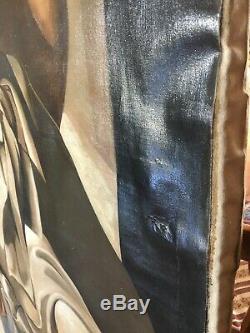 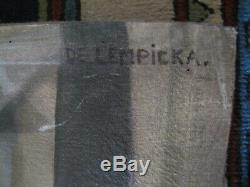 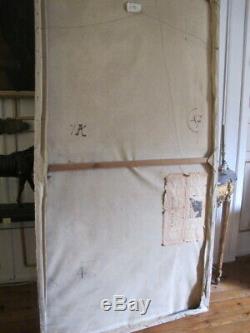 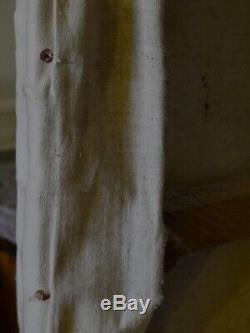 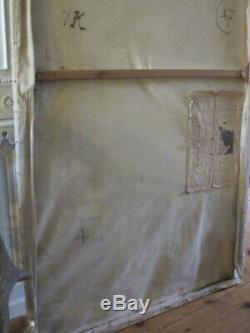 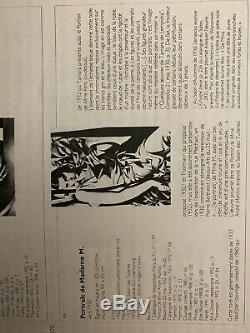 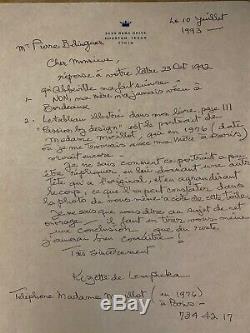 My father was once a collector of antiques. In this collection I have now, there is a large picture painted in 1930 / 1940.

I presented this table to the auctioneer, who technically located in the realization of this painting in the first part of the XXth century 1930, 1940. Dimmensions 189 cm x 105 cm. On the visible signature on the table, this professional auctions advised me to do research with more relevant experts on the origin of the painter for this period. This painting is signed: t.

Signature at the top right of the canvas. In 1992, through the publisher \I made contact with his daughter Kizette of lempicka Foxhall, houston, usa.

She responded to my mail. In her letter, she told me to be surprised, because the design of this table and in particular the choice of the size and the different allocation of the face, seems to be an enigma. Indeed, there is already known similar picture but in a different version. On the table already known, the model's face matches that of the sponsor at the time Madame Morillot. On my table, nothing is the same, except a face which no longer corresponds to that of Madame Morillot, but that of an unknown female face with blonde hair. At the bottom of his letter of Kizette lempicka gave me Madame Morillot phone number that was one of the models and painting friend of his mother. Maybe she thought madame-Morillot could bring me clarification on the origin of this portrait? This is a hypothesis to explain this would have required that the original two pictures were painted with the will of the artist to each of the same composition. That is, two portraits depicting two female models to hair color and different faces while maintaining on each of the portraits the same identical shape poses and colors. Depending on the needs of the use, the size of the canvas, one of the two tables, was chosen larger. (Mine is bigger: height 189 cm). In his biography there are also some paintings of large dimensions, such as \I moved to Paris in 1992, thinking even to meet with Mrs.

Unfortunately, his known telephone number (734 42 17) for 1976, when the lempicka still living in Paris, was no longer valid. For his part, Kizette of Lempicka, who knows perfectly the work of his mother, does not speak in his mail addressed to me from living fraudulent copies of his mother. She wondered about this curiosity.

In addition, she gave me the phone number \She said in her letter, I have to do on my side some research and she says she will wish to be kept informed of the findings. This painting has never been restored and despite its colors have faded and changed over the years, this picture is impressive and fascinating by the look of the subject. Moreover, behind pictures of the face I I had him join, Kizette of lempicka has mentioned to pen what look!

I enclose with this letter two photos showing: my picture of the lady with blond hair and \This table has never been installed on a real frame, the fabric edges was never intersected. Traces of nails visible on the web are spaced 15 cm.

This picture seems to have been used for exhibitions. This will make 50 years that this table is in my family. I would now do further research on its origin. I remain at your disposal to send you the pictures you could want as well as further information.

The item \The seller is \This item can not be delivered, the buyer has to pick him up.