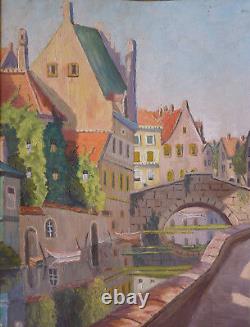 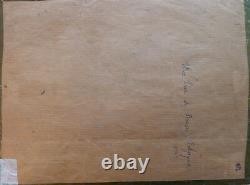 Dated and located on the back. The date seems to be of a different hand.

Very beautiful oil on canvas without frame. Dated and located on the back.

The date seems to have been written by another person. 9.4\" x 13.0\" in. He practiced in France after the Second World War.

Hij beoefent in frankrijk na de 2nd wereldoorlog. Art Deco is an artistic movement born in the 1910s and which took off in full swing in the 1920s before declining in the 1930s. He was extremely lively especially in the decorative arts, architecture, design, fashion and costume, but in fact concerned more or less all forms of visual arts.

It is the first style to have had a worldwide circulation, mainly affecting France, Belgium, all Anglo-Saxon countries United Kingdom, United States, Canada, Australia, New Zealand, India, Filipinos, etc., as well as several Chinese cities such as Shanghai or Hong Kong. The art deco style takes its name from the international exhibition of modern decorative and industrial arts held in Paris in 1925. Vocabular taking different forms depending on the region, architects and their clients, its stylistic unit is based on the use of geometry (and geometrization) for decorative purposes. Without a real leader or theory, this style was criticized from the very first years for its superficiality. It was particularly used for all buildings that should enhance the image of its sponsor or evoke leisure activities: commercial architecture boutique, head office, etc., theatres and cinemas, but also domestic architecture (the décor serving as a sign of social distinction).

First reaching the wealthiest classes, it spread rapidly throughout the social body and became very popular. A movement of reaction against new art appeared at the beginning of the century in France, and even earlier abroad as in Belgium, Germany, the Netherlands, etc. Some already refer to art nouveau forms as \"soft\" or \"noodle style\" (nou). They then move towards simple lines, classical compositions and a parsimonious use of décor. This desire to return to order, symmetry and sobriety takes on different expressions in different countries.

In Austria, for example, the undulating line of the early days of art nouveau was quickly replaced by a network of orthogonal lines and simple volumes under the influence of the Scottish architect and designer charles rennie mackintosh. Josef hoffmann, koloman moser, otto wagner and the werkstàtte wiener are the emblematic artists of this trend. The interiors, known by photographs, mobilize all the wiener werkstàtte and the painter gustav klimt. In France, the first signs of this desire for change were noticeable as early as the 1900s.

In 1907, eugène grasset published a method of ornamental composition that gave pride of place to geometric shapes and its variations and contrasted with the undulating freedom of the guimard style, so prized in Paris a few years earlier. The following year, paul iribe.

Draws for paul poiret a fashion album whose aesthetic strikes the Parisian milieu with its novelty. The third major event was the 1910 Fall Show. Sees the invitation of Munich artists who had for several years had. Around 1910, the French decorators André mare and louis see also evolved their style towards more rigor and restraint.

These developments are summarized in 1912 under the pen of andré vera. His article the new style, published in the magazine Decorative Art, expresses the rejection of art nouveau forms (asymmetrical, polychrome, picturesque, which excite feelings more than reason), and calls for \"voluntary simplicity\", a \"unique material\" and \"manifest symmetry\". The end of the article urges artists to draw inspiration from the classicism of the 18th century marked by \"clarity, order and harmony\" and to take the thread of the history of French styles from the Louis-philippe period, without pasticher. Last words of vera describe two themes that will be ubiquitous in the future art deco style: \"the basket and the garland of flowers and fruits\".

The influence of painting should not be overlooked in explaining these developments. These 1910s were the moment of diffusion and popularization of Fauvism and even more of Cubism. The painters of the golden section exhibit works that are often more accessible to the public. Than were those of picassos and robbers of. The period of analytical cubism. And the shimmering colours contrast with the fragmented and avant-garde still lifes of the movement's pioneers. The Cubist vocabulary is ripe to seduce the creators of fashion, furniture and interior design. Finally, the bets of the 1910s discovered the Russian ballets of diaghilev serge, mixing dance, music, and painting, inspired by the \"thousand and one nights\", they were an invitation to luxury and exoticism; the costumes are created by leon bakst and many others. From where the fashion of fans, feathers, water jets, bright colors. The unusual colours will bemposed in the décor and furniture: we will see boudoirs with orange walls, lounges stretched with black. Order, colour and geometry: the essentials of art deco vocabulary are laid down.

The Roaring Twenties the First World War deeply hurt the French and German economies and societies. While the Germany of the 1920s was stunned by defeat and a serious economic crisis (as the artists will witness the new objectivity), France saw its economy recover. This recovery cannot make us forget the difficulties on the ground. The destroyed cities needed to be rebuilt (such as reims and Saint-Quentin, for example, 80% destroyed during the war, which will be rebuilt largely in an art deco architectural style). Moreover, monetary instability generated a steady rise in prices until 1927 and the.

Rent legislation is causing a severe housing crisis for the working and middle classes. But the early 1920s also saw the manifestations of the wealth intact of the wealthiest classes. In Paris, as in the major provincial cities, commentators of the time observed the construction of rich report buildings, villas and mansions. These are all prolific projects for decorative artists and art deco architects. The item \"henri rossels (1888-1950) hst 1945 bruges brugge Belgian school belgische school\" is on sale since Thursday, March 8, 2018. It is in the category \"art, antiques-art of the xxe, contemporary-paintings\". The seller is \"galerie_d.Art\" and is located in bets. This item can be shipped to the following countries: America, Europe, Asia, Australia.