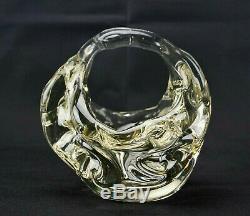 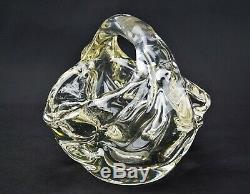 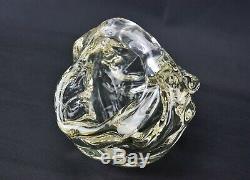 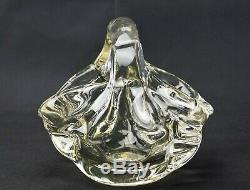 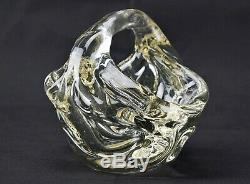 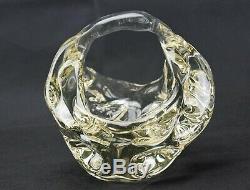 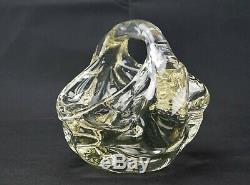 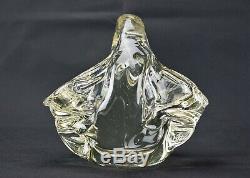 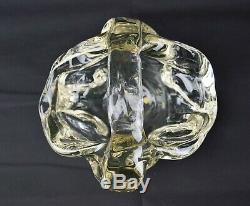 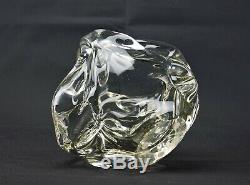 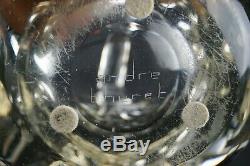 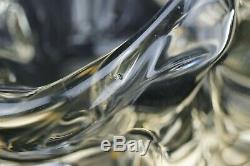 High cutting André thuret thick cast molded hot glass signed at the point unique. Large basket cupped glass thick by André thuret end of the art deco era between 1930 and 1950 for a weight of 4800 grams. Single glass thick piece, cast, tinted and shaped to the hot iron and tweezers. From a stylized decor high relief corrugations. Deep cut basket shape with a large handle, high and bent on an oval and conical body.

Thick translucent glass coloring slightly amber transparent. Signature at the tip under the heel: andre thuret. The cut is very state. A note: a small chip on the cutting edge (photo 12). A single large piece size by André thuret work with a transparent, glass cast, carved and shaped by heat. Price of delivery: France: 25 euros, Europe: 35 EUR International: 65 euros. Was born November 3, 1898 in Paris. His high school graduation he joined in 1916; demobilized in 1919, he spent his Bachelor of Science and a degree in law and occupies from 1922 engineering positions with glassworks bagneux, then bezons. The exhibition of decorative arts in 1925. And get personally a diploma of honor.

Since 1926, assistant and head of research, chemistry Chair applied to industries of ceramics and glass at the National Conservatory of Arts and Crafts and expert near the Paris Court of Appeal, he divides his time focused on the glass between his teaching, scientific research and production artist. Since the release he exhibited regularly at fairs decorators, fall and in galleries and in 1951 took part in the glass exhibition at the Marsan pavilion. Some of his works were acquired by the state. Committee Member of the s.

Associate the autumn fair, André thuret is a knight of the Legion of Honor since 1947. Quite exceptional cases, it is through science that André thuret came to art. These are her engineer and chemist who serve the artist and determine experimentally the various stages of its evolution. The scientist provides the creator of forms, rhythms and colors fluid and transparent beauty of glass and reactions of metal oxides. All vases, cups or bottles thuret are unique, blown and worked by the traditional technique at temperatures exceeding 1,000 degrees.

A André thuret its debut blowing the \Thus he created, in 1925 these internal sets a new \white, then the chemist comes to color. More recently, in order to achieve more subtle designs, they are almost manual processes sculptors involved. Thuret always part of the first parison, glass transparent and fluid, it blows to the required shape.

Moreover it style glass beads he colored on marble and it fixes, according to previously designed rhythms and then working model for iron, tweezers and before the \smooth and white. Thus getting parts to external and internal transparency in the heart which play rare tones, purple, blue, green, gray, red sometimes enclosed in an originally independent life. Art as learned as accurate despite the mysterious fantasy appearances. The item \bud vases \The seller is \This item can be shipped to the following countries: america, europe, asia, australia.