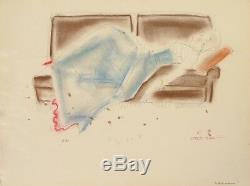 19.7 \André Bizette-Lindet, born in 1906 and died in 1998 savenay at Sevres was a French sculptor. In the second part of his career, he will contribute to the living wall research group that seeks to articulate the sculpture to contemporary architecture. His work, carved on a wide variety of materials sandstone, granite, bronze, ceramics .., then in large monumental part. In 1955, he made the altar of the Rouen Cathedral.

It is a green serpentine marble table of the Aosta Valley, based on the symbols of the evangelists lead browned. Designated \Bizette Lindet is the author of a high relief frescos (Fezzan) decorating the Memorial France fighter on Mount Valerian, Suresnes.

André Bizette-Lindet, who spent his youth at Le Mans (Sarthe) and was student of the high school boys mans, has made several sculptures for city ette in 1950-60: the monument to Marshal Leclerc (instead franklin roosevelt), 7 statues of gilded bronze representing the arts, which decorated the municipal theater, Place des Jacobins, sculpture adorning the university science college montbarbet street. André Bizette-Lindet, born in 1906 in savenay and died in 1998 in Sevres is a french sculptor.

In the second hand de son career, he will contribuer to the living wall That research group seeks to articulate contemporary sculpture with architecture. His work, was carved wide variety of materials sandstone, granite, bronze, ceramic ...

In 1955 he Realized the high altar of the cathedral of Rouen. It is a green serpentine marble table of the aosta valley, resting on the symbols of. Designated \Bizette Lindet is the author of one of the frescoes in high relief (the Fezzan) Adorning the memorial of the fighting France, on mount-valerian, in suresnes.

André Bizette-Lindet, Who spent all His youth at the mans (Sarthe) and Who Was a pupil of the boys'school of the mans Several sculptures made for this city in the years 1950-1960: the monument in memory of Marshal Leclerc (instead franklin roosevelt), the seven gilded bronze statues Representing the arts, qui adorned the municipal theater, instead of the Jacobins, the sculpture Adorning the university science college, montbarbet street. The school of paris is a concept that refers to all the foreign artists arrived before the 1920 Preliminary Clarification the generic term \In reality, it does not refer to any school who really existed; the expression, which made the object of jobs unfit, remains ambiguous and should be clarified. In his dictionary of school painters of Paris (1993), lydia Harambourg justifies lemploi expression by what allows to establishing continuity between the different phases of development of modern art of the hand of artists who had paris residence. His book does not present a school or a particular current, but twenty years of paris painting, \dart matter. \event of a renewal of the previous. The first period is from 1900 to 1920, the second covers lentre the wars and the last refers to post-World Second World War.

It thus refers to all the foreign artists arrived in the early twentieth century in the capital in search of favorable conditions for their art. From 1900 to the First World War, Paris was in fact seen an influx of artists, often in Central Europe, which is mainly set in Montparnasse. Among them Marc Chagall, Pablo Picasso, pascin, modigliani Amadeo and tsuguharu foujita to do. The term \Many school of Jewish painters of Paris.

These artists come from ballast: Russia, Poland, Germany, Bulgaria, Czechoslovakia, Romania, Hungary. They were familiar with the French masters of the nineteenth and know the Impressionists lintermédiaire by their teachers as Józef Pankiewicz in Krakow, Ilya Repin in St. Petersburg, Adolf Fényes, Isaac Perlmutter in budapest and lovis Corinth in Berlin.

Jewish artists of the Paris School. Leopold gottlieb share in Poland join the army of Marshal Pilsudski. Marc Chagall, Emmanuel mané-katz, Schleifer savely returned to Russia. Many people volunteer in the French army: kisling reformed in 1915 after an injury; Louis Marcoussis, friend of Apollinaire, will be decorated; simon on Mondzain will keep the uniform until July 1918. Some reformed for health reasons, as modigliani and Soutine, then volunteer to chores.

Pascin left for London to escape serving in the Bulgarian army. During the war years, the artists stayed in Paris without pensions or assistance show solidarity. From 1915, married Vassilieff held artistic canteen in his studio located in the impasse of 21 Avenue du Maine, which is always packed throughout the war. The First World War marked the entry of Jewish painters of Montparnasse on the Parisian scene. In December 1915, germaine bongard on the couturier Paul poiret, is sponsoring a series of exhibitions in his shop in the Rue de Penthièvre.

The first presents modigliani paintings, paintings by kisling who side with paintings by Picasso, Fernand arrays of light, of matisse and André Derain. These painters unmade gradually marginalized position that was theirs.

The return from the front gives them a \Léopold Zborowski organizes December 3, 1917 the first solo exhibition of modigliani, the gallery b. Weill, and the preface to the catalog, Blaise cendrars wrote a poem. The interwar period three steps Immigration School of Paris artists eugene zak leaving Warsaw to Paris in 1900, mela mutate in 1901, Jacques Gotko happen to Odessa in 1905 and adolphe feder of Ukraine in 1908 the same year that the German otto freundlich.

Samuel Granowsky arrived in 1909, as Maurice mendjizki, who just Lodz. Leaving Russia, Marc Chagall pass first, from 1910, four years paris. Istvan farkas arrives from Budapest in 1912, Emmanuel mané-katz of Ukraine in 1913 ... Those who settled between 1900 and 1912 have had time to set up the network of friendships and relationships necessary for their development. Other painters succeed them, fascinated by Montparnasse.

The meet soon: Vladimir Naïditch of Moscow in 1920, zygmunt pram Poland in 1920, alexander Fasini of Ukraine in 1922. The Russian Ossip Lubitch arrived in 1923, the Belarusian isaac Antcher in 1924, the Polish esther carp in 1925. Issachar Ryback happen to Ukraine in 1926, abraham iris (irisse said antoine) arrived from Bessarabia in 1926, jacob Macznik of Poland in 1928.

As for the Russian Prince alexis Arapoff the painter, born in petersburg, he fled ussr, in 1924, with a theater company. The interwar period therefore knows the arrival of other Russian artists such as André Lanskoy, serge poliakoff, alexander Garbell etc. And sees the emergence of new stylistic trends, such abstraction, and the importance of color in painting. Upon accession of Hitler to power in 1933, artists fleeing Nazi Germany: Lithuanian moses bagel jésékiel Kirszenbaum and jacob Markiel arrive in Paris. In Poland, Sat ringer, after being forced to work at the camp Auschwitz building, was deported successively in nine different camps and eventually come to Paris in 1947 to enter the fine arts.

At Montparnasse, for twenty years, under the cloak under tables or terraces of the rotunda, dome, dome, traffickers buy and sell paintings by Derain, tables of utrillo, paintings by Picasso or modigliani escaped miraculously cardboard painters. Indeed, the three main paris school's cafes are dome, rotunda and cupola. More eccentric to puteaux we find the restaurant camille renault said \The dome was created in 1898 and it was around 1903 that the Jewish painters of Germanic language, walter bondy, Rudolf Levy (of), Béla Czóbel, julius pascin, Reszo balint make it their favorite place in the traditional cafes Munich . They find art dealers Alfred Flechtheim (of), Henir bing ... Other groups consist of Dutch and Scandinavian painters. The rotunda is an older facility, handled by victor Libion ​​in 1911. This very generous man towards painters welcomes painters and sometimes janitor in exchange for consumption, but also Michel.

Larionov, Natalia Goncharova, adolphe feder. Financial difficulties forced Libion ​​selling the rotunda in 1920. Along with the dealers, this man has contributed to the outbreak of this life through his attitude and sensitivity. The dome was inaugurated in December 1927 by the managers of artists Fraux dome and Laffont. Some thirty painters decorated the pillars and walls with paintings directly on the concrete: light Fernand, Vassilieff marie david seifert, nathan Grunsweigh, george kars, Othon Friesz the Second World War a group of painters, who undertake to expose under occupation, gathered by the French tradition of twenty young artists exhibition, organized in 1941 by jean Bazaine and publisher andré Lejard.

The title of the exhibition actually mask demonstration dune improper painting Nazi ideology of degenerate art. \What made them accept the general title and soothing, intended to reassure the occupant it was no nothing else nothing less than to allow, by surprise, a Judeo Marxist exposure, in all its forms, to when galleries dared not show that the art of Nazi affiliation. After refusal of a number of galleries, the gallery braun accepted the risk of exposure, which was received with a press insults torrents well trained, \Indeed these painters are far from traditional forms of art.

However stowed under the term \They looked in there, looked at each other, turned on his heel. This was the time when the Germans still wanted to be nice, \The exhibition becomes the manifesto of a modern painting and brings together several artists to non-figurative trend jeans the moal, Alfred Manessier, charles Lapicque, Jean Bazaine, Edouard pinion, leon Gischia, maurice estève charles walch, Gustave Singier, Jean Bertholle, André beaudin and Lucian lautrec. Two years later, on 6 February to 4 March 1943, a group exhibition Twelve painters of today, stands at the France gallery with Bazaine, boron, chauvinist, estève, André Fougeron Gischia, LAPICQUE the moal, sprocket, Singier , Villon, Lautrec, tal coat. Despite their aesthetic differences emerge from this group artists who will soon be appointed as new members dune school paris. Pierre Francastel in a book written under the occupation but published on release in 1946 new drawing.

School of paris, accredits indeed the Romanesque style. Cubist painters of the so-called \The post-war today, the term \The expression has been hijacked by some in the 1950s to define a national figurative aesthetic; it takes a strongly negative connotation in the vocabulary of criticism of late 1960 flagornant school new york.

Moreover, Parisian galleries turns confusion about the use of the term. In January, 1952, at dune exhibition at the Babylon Gallery, Charles Estienne takes the party to muster only in abstract tendencies of artists. They are presented as guarantors of the new school of paris born between 1940 and 1950. The carpenter gallery in 1960, is expanding its selection of artists. It is exposed by the Paris Biennale in 1961.

The article appeared in art appreciation at the time of the exhibition retraces the content: \This is what quont including the annual the exhibition organizers called school of paris (carpenter gallery). They added to their guests twenty-seven Italian painters Peverelli which is the only one to live paris. Other, burri, Dova, schneider and Fontana Orazi have gained an international reputation. \The seller is \This item can be shipped to the following countries: america, europe, asia, australia.
vasemassive signstatueredpastegooddancerdecosculpturepaintingnouveauforgeddecordecorationoldrarestyleceramicbrothersdaumglasslargenewbeautifulmassivesignedcutoilsignlampmullerpairwomanbronzechandelier