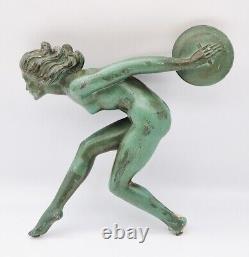 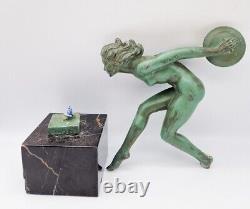 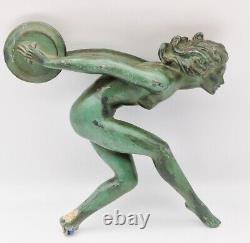 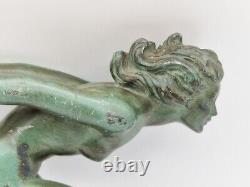 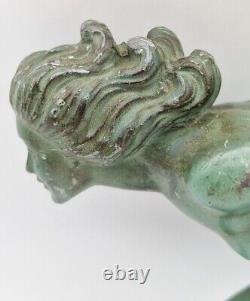 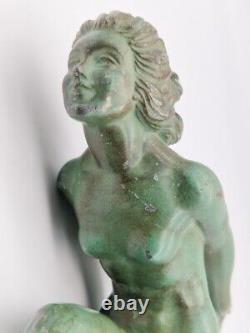 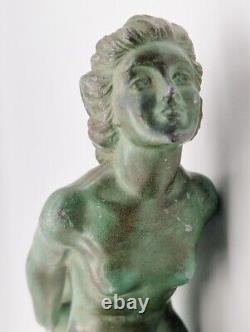 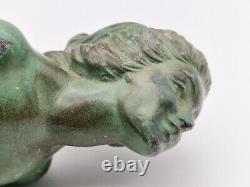 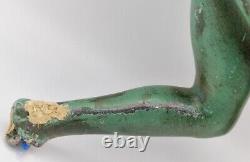 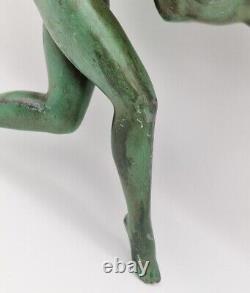 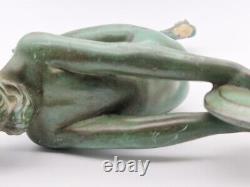 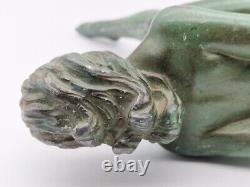 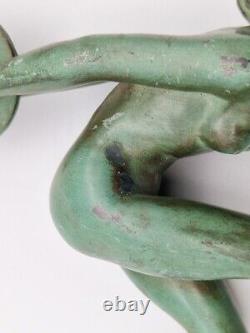 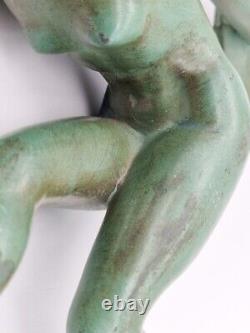 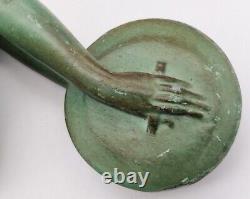 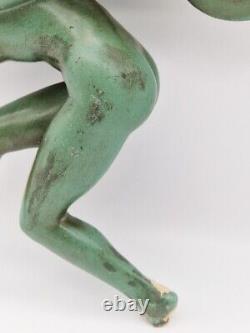 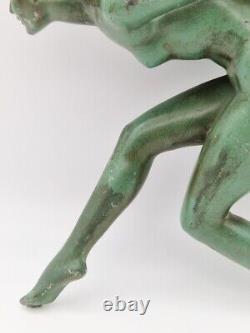 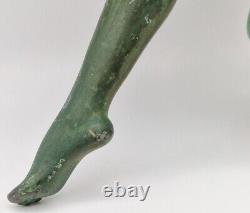 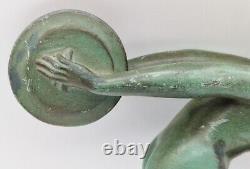 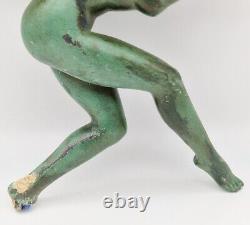 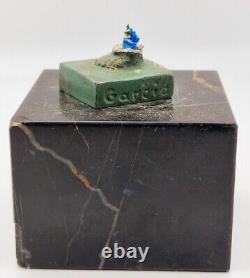 Don't hesitate to visit my shop. Which contains more than 600 objects. Photo status - wear and tear of time and use - has to clean - damaged marble and sculptute. To restore because the former owner did not make a correct restoration, with an ankle and a screw at the foot, while many professionals can restore this metal piece - well look at the 48 photos in the cartridge: object description. Louis octave maxime the glassmaker was born in neuilly on seine, January 29, 1891.

Art deco takes its name from the first international exhibition of modern decorative and industrial arts held in the heart of betting in 1925 and brought together 21 countries. It has welcomed more than fifty million visitors. During this exhibition, max the glassmaker received a gold medal. This style was widely regarded as an eclectic mixture of elegance and modernism, imbued with various influences (from ancient Egypt, ancient grace or tribal art). At that time, women were being liberalized. Short hair and gowns on the knees (which allow for the dancing of angry charlestons) characterize the emblematic figure of the "boy". The most beautiful performances are suzanne lenglen (tennis champion, symbol of moving graphics), tamara de lempicka (painting) or josephine baker (black dancer with very popular success).

The famous clart of max the glassmaker, which he created in 1928, is also a perfect illustration of the "boy". This new feminine silhouette, thin and slender, dressed slightly, often in motion, was an important source of inspiration for max the glassmaker when he made his series of small dancers, gymnasts and art deco lamps.

He will address this theme and that of animals with a great fluidity of lines and a sobriety of forms. The captivating beauty of his creations lies not only in the extreme delicacy of the hands and sculpted faces, but also in the elegance and charm of their poses.

Max the glassmaker returned to bets after the armistice of November 11, 1918, equipped with few resources, but endowed with a great spirit of independence. From this date he will devote his entire life to sculpture.

He rents a theatre-street artist's workshop, where he works 12 hours a day. He edited some terracotta works, then made his first sculpture, his famous pelican in the 1925 style (ax sculpture). This piece, signed artus (pseudonyme de max le verrier), has a great success and is at the base of its publishing house created in 1919. He assures himself, the manufacture (font, chiselure, patina) and the sale of his works.

He will create a "marabout", a "squirrel" of cubist tendency, as well as panthers ("baghera"), chimpanzees ("a monkey with umbrella"), horses, lions. In the company of famous animal breeders including pompon (triomphe in 1922 with the polar bear exposed at the autumn salon), hernandez, delhommeau. At the same time, it will create many stoppers of car radiators, very popular at that time, notably the model "eola" replica of the famous stopper of the roll. The profits made on the first creations allowed him to hire workers whom he himself formed and to hire a representative.

He founded his own company in 1926. Its collection is already very extensive, it is the American period, the golden age until 1929. Max the glassmaker sculpts many statuettes, men, dancers. In 1928 he made his famous clarte, a woman with a ball of light, a bronze master's play, after. In reality, there were three different models: one for the head, one for the torso, and one for the legs: an American black ballet of josephine baker. This torch of the 1930s echoes the idea of the ancient goddess of light, and at the same time symbolizes the era by his boy hairstyle and the sobriety of his line. Max the glassmaker reopens the workshops. The war ended, normal life gradually resumed. Most of the major bronze publishers have disappeared.

Mr Lehmann died in the concentration camp, Mr Glodsheider is ruined. Max le verrier takes over the manufacture of statuettes in cast iron and bronze, then directs his activity towards the creation of bronze objects: caskets, ashtrays, office articles, religious articles, medals and acronyms whose decoration is inspired by ancient or medieval masterpieces, coat of arms of cities, castles of the Loire, cathedrals, museums, and private collections.

He was assisted by several skilled workers and his foreman, Mr. Marsail (great gold medal of labor).

His wife and two sons also work for him. A tireless sculptor, he creates a new series of bronze animals, published in small format. (birds, rhinoceros, donkey, goat, bear, sea lion and a "donation quixote and sancho panca" group). Until his last breath, he made sculpture and finished, on his hospital bed, a small panther 3 days before disappearing, on June 6, 1973, at the age of 82. He is buried in the graveyard of castenay and breaks them, next to his friend the faguays disappeared 10 years before him.

(dix the site of max the glassmaker). This item is in the category "art, antiques\art of xxe, contemporary\sculptures, statues".

The seller is "austrouvails" and is located in this country: fr. This item can be shipped to the following country: whole world.